Posted on February 20, 2013 by Herman of bibledifferences.net 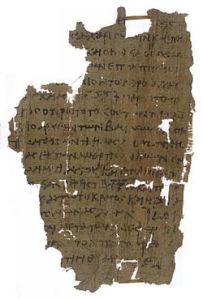 Have you ever made a hearing mistake?
Let’s assume you have to translate the following sentence and is confronted by two manuscripts, the one reading: “MAY THE SUN ALWAYS ENLIGHTEN YOUR WAY”. The other says: “MAY THE SON ALWAYS ENLIGHTEN YOUR WAY”. How would you decide which is correct? Both make perfect sense, yet both cannot be correct.
Could you believe that in a single sentence in Revelation no less than three variations exist, due to faulty hearing! And all three make perfect sense!

During the fourth century Christianity received official sanction. Many new churches were planted and many copies of the sacred scriptures needed. About 331 A.D. Constantine placed an order for fifty copies “to be written on fine parchment in a legible manner …by professional scribes thoroughly accomplished in their art.” Such an order could only be done in a scriptorium where a reader slowly read from his source copy while many official scribes wrote down what they heard. In such a situation words sounding the same could be confused causing a variation that could not easily be discerned, especially when it made perfect sense.
That is the logic explanation for the three variations of Revelation 1:5 found in Greek manuscripts.
1) The Greek word “luō” (loosen or free) and “louō” (wash) sound very similar. In this verse we find the variations “lusanti” (He freed) and “lousanti” (He washed.)
2) The second confusion is between “hēmas” (us) and “humas” (you). This variation is found in one Greek manuscript as well as an Ethiopic translation. This variation causes the sentence to read: “To him who loves us and has freed you from the sins, by his blood.” instead of: ” To him who loves us and has freed us from the sins, by his blood.”
3) In the third variation the scribe combined the preceding word “kai” with “lusanti” and understood it to be “kalesanti” (called out). This variation also makes sense: “To him who loves us and has called us out from the sins, by his blood.” Three variations in a single sentence!
Only the first variation needs our attention – I mentioned the other two only for the sake of interest.

How could one discern which variation could be the word written in the original autograph? Let as first study the manuscript evidence:

External evidence.
Before 500 A.D. “freed” is found in four Greek uncial manuscripts and in six minuscule manuscripts after 1000 A.D. Of great importance is that the oldest manuscript, a fragment of ±220 A.D. containing only Rev. 1:4-7, reads “freed”. How astonishing that God let this tiny scrap of papyrus, containing specifically this verse be saved!
Until the year 700 A.D. “freed” is also supported by five Antique Translations. Two Old Latin (Europe), Armenian (Russia), Ethiopic (Africa), and Syriac (East of Israel). The value of antique translations is that they confirm that a Greek manuscript containing that specific version had been present in that location during those early years.
Four Church Fathers also quote “freed”. Tyconius (†380 A.D.), Primasius (†552 A.D.), Cassiodorus (†580 A.D.) and Andrew (†614 A.D.) who gave us the first commentary on Revelation. He gave preference to “freed” though he also quoted “washed”.

“Washed” for the first time is found in a Greek uncial manuscript after 800 A.D. with support of only one other uncial, 100 years later, as well as 12 minuscules later than 1000 A.D.
In the Antique Translations “washed” also has fairly good support. The Vulgate (Rome), 8 Old Latin (Europe), as well as Bohairic (Egypt), Ethiopic (Africa) and Syriac (East of Israel).
Only two Church Fathers quote “washed” namely Andrew (†614 A.D.) who knew both versions and Arethas (†914 A.D.)
When considering the manuscript evidence, two aspects should be taken into consideration:
1) The oldest manuscripts support “freed”.
2) Only when churches became numerous, large orders for copies were needed. A variation caused by faulty hearing would originate in a scriptorium. Therefore the version found in older manuscripts makes additional appeal to represent the authentic word, before the era of scriptoria.
According to the manuscript evidence “freed” has greater support to represent the original.

Internal evidence.
Internal evidence explores the possible cause for the variation. In this case it is obviously due to faulty hearing. Whatever the original, this variation could be caused either way. No definite conclusion can therefore be made.

Intrinsic evidence.
Intrinsic evidence explores different aspects concerning the content itself, like the use of certain words, context etc.
In the Greek New Testament no less than five words are used for “wash”. (niptō Mat. 6:17, baptizō Mark 7:4, brechō Luke 7:38, apolouō Acts 22:16 and plunō Rev. 22:14.) The word louō (wash) is found only in the Textus Receptus, only in this specific verse. Nowhere else in the NT.

Concerning “wash” and the “blood of the Lamb”: Rev. 7:14 refers to people having “…washed (plunō) their robes and made them white in the blood of the Lamb.” Likewise “plunō” is used in Rev. 22:14 in the NA/UBS texts. (See post no. 56 on this verse.) These are the only places in Revelation where “wash” (of robes) and the “blood of the Lamb” are used together in connection with our salvation.
The relationship between sin, salvation and the blood is not handled elsewhere in Revelation in order for us to draw further conclusions on the use of these words. In Rev. 5:9 we read: “…and with your blood you purchased men for God…” but there a specific term from commerce is used for “purchased”.
Intrinsic it is obvious that “freed or loosed” and not “washed” is the Biblical term used together with the “blood of the Lamb”.

May the certainty of being loosed of your sin by blood of the SON enlighten your way like the SUN enlightens your day!

Your comments at the bottom of this page are very welcome.

The reasons for the differences between older Bibles like the King James Version and newer Bibles like the New International Version have fascinated me ever since my studies in Theology at the University of Pretoria in the seventies. I have great respect for scribes through the ages as well as Bible translators, so there must be good reasons for the differences. With more than 5600 Greek manuscripts and more than 19000 manuscripts of ancient translations to our disposal, the original autographs of the New Testament can be established without doubt. I investigate the reasons behind the differences and publish the facts in a post on my blogs www.bibledifferences.net (Afrikaans: www.bybelverskille.wordpress.com) to enable my readers to judge for themselves. Personally I love to make an informed decision based of facts. That is why I endeavor to provide that same privilege to the readers of my blogs. Since 1973 I am married to my dear wife and greatest friend, Leah Page, founder director of Act-Up Support (www.actup.co.za) a prayer ministry for families struggling with drug-, occult- and other dependencies. We are blessed with two daughters and two sons, four grand sons and two grand daughters. God is alive and omnipotent! Glory to His Name! Herman Grobler.
View all posts by Herman of bibledifferences.net →
This entry was posted in Ancient Translations, Church Fathers, Context, External Criteria, Internal Criteria, Intrinsic Criteria, KJV/NIV Controversy, United Bible Societies Text and tagged Ancient Bible Manuscripts, Ancient Bible Translations, Criteria to evaluate Bible differences, KJV/NIV Controversy, Writings of Church Fathers. Bookmark the permalink.