Something that many Christians have questions about, is the position and authority of the apocryphal books. Why are there two different sets of books? How did the Church discern which documents had to be included in the Bible, and which had to be left out of it?

Since Old Testament times, believers have kept safe, two distinct collections of books in the temple and in the synagogues. The first collection was known as the canon (measure or guide). These documents were accepted as defining the believer’s spiritual as well as his carnal life. The second collection was also seen as of value, but not as authoritative, was kept apart and out of sight. They were called the apocrypha. (apokrufos, Greek for covered or concealed.)

The “church” and believers had to decide themselves which documents could be deemed “canon” or measure for the spiritual life, and which should be hidden as “apocrypha” or even be discarded.

At present there are people who argue that these so-called apocrypha contain the true will of God, but are concealed by the “church”. Dan Brown, in his fictional conspiracy novel, “The Da Vinci Code”, makes a lot of the apocryphal “Gospel of Phillip”. Let as look at this apocryphal book and see where Brown gets his idea for the existence of a physical descendant of Jesus. 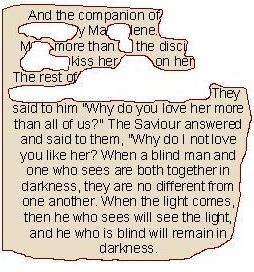 Only one copy of the gospel of Philip exists. It is written in Coptic (ancient Egyptian). It was discovered in 1945 near Nag Hammadi in Egypt. The theory that Jesus had been married to Mary Magdalene and even fathered a son, is based on a single sentence in this document. What is even more astonishing is the fact that the crucial words on which this theory is based, is not present in the document itself, due to wear and damage to the manuscript. These words were created by scholars studying this document. Unfortunately I could not find a copy of the specific page. To help visualize the problem, I recreated the “page” with the English words. Were it written in English, the page could look like the image below.

The “reconstruction” of the missing words are added in red.

When one has to fill in what is missing, the question is whether the correct words are chosen, or whether words are inserted to create a certain message that the scholar would like the text to say. Did Jesus indeed kiss her “often” or “occasionally” or “never”; and was it on her “mouth” or “forehead” or “hand”? Even if the words are correct, is it legitimate to deduct from kisses on the mouth that Jesus had been marries to Mary, and even fathered a son? Were Jesus married to Mary there would be no reason at all for the questions of the disciples let alone their disapproval! Then the logic answer to their complaint would have been something like: “of course I love more than all of you, am I not married to her?” The deductions Brown makes from this passage, borders on the absurd!

And that is one of the problems with the apocrypha. They are used and misused to further anyone’s purpose.

In ancient times ethics concerning the writing of books and the authorship of books were quite different from what we are accustomed today. The practice of writing in the name of some important person (a Pseudepigrapha) to add authority or flair to it, was common practice. Since laws on copyright did not exist, there was little one could do.

The Church leaders weighed all documents and decided on which should be deemed canon, and which not. Even today, when we study the apocrypha, we find nothing new or of any significance to our faith.

The reasons for the differences between older Bibles like the King James Version and newer Bibles like the New International Version have fascinated me ever since my studies in Theology at the University of Pretoria in the seventies. I have great respect for scribes through the ages as well as Bible translators, so there must be good reasons for the differences. With more than 5600 Greek manuscripts and more than 19000 manuscripts of ancient translations to our disposal, the original autographs of the New Testament can be established without doubt. I investigate the reasons behind the differences and publish the facts in a post on my blogs www.bibledifferences.net (Afrikaans: www.bybelverskille.wordpress.com) to enable my readers to judge for themselves. Personally I love to make an informed decision based of facts. That is why I endeavor to provide that same privilege to the readers of my blogs. Since 1973 I am married to my dear wife and greatest friend, Leah Page, founder director of Act-Up Support (www.actup.co.za) a prayer ministry for families struggling with drug-, occult- and other dependencies. We are blessed with two daughters and two sons, four grand sons and two grand daughters. God is alive and omnipotent! Glory to His Name! Herman Grobler.
View all posts by Herman of bibledifferences.net →
This entry was posted in Apocrypha. Bookmark the permalink.