Posted on August 7, 2012 by Herman of bibledifferences.net

In some cases it is obvious that certain words were deliberately changed by a well-meaning scribe. This he did to rectify an error that he believed a previous scribe had made. It also happened when a scribe had been of the opinion that the present text could be understood wrongly, or even could injure the honor of God or Jesus Christ.

Variation in spelling of words is common in all languages. Intentional changes concerning spelling and grammar is common in the New Testament manuscripts. It is especially prevalent in the Book of Revelation with its frequent Semitisms and unusual terminology taken directly from the Hebrew. This type of alteration is mentioned to explain the reality of intentional alterations. It does not influence differences between the KJV and the NIV.

Harmonistic changes are alterations made to harmonize one document with another, especially the gospels. It could also happen where more accounts of the same incident were reported within the same document like the conversion of Paul in Acts 9, 22 and 26. Some changes could have happened unintentionally, but others were deliberately. Already during the second century great damage was caused to the uniqueness of the different gospels by Tatian, (±170) a Syrian from Mesopotamia. He deliberately tried to harmonize the four gospels into a single narrative, called the Diatessaron (through four [gospels]). His Diatessaron was quite popular, especially in the East. Some Church fathers realized the confusion that this document caused and started destroying them, replacing it with the original gospels. 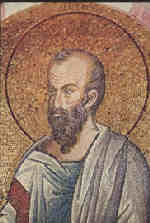 Theodoret, (379-457), bishop of Cyrus for instance destroyed about 200 copies and placed a gospel in its place. (Picture taken from Wikipedia.)However, the influence of the Diatessaron compilation can still be seen in the Gospels.

Let’s look at Mat.18:11, which is left out from the NIV. Mat.18:10-12, NIV: “See that you do not look down on one of these little ones. For I tell you that their angels in heaven always see the face of my Father in heaven. 12 What do you think? If a man owns a hundred sheep, and one of them wanders away, will he not leave the ninety-nine on the hills and go to look for the one that wandered off?” Note that vs.12 starts with a new subject, the seeking of the lost. (Manuscripts up to 8th century: =2; 9th – 12th centuries: =5) It is important also to note that no less than 4 Church fathers up to the fourth century as well as the Apostolic Canons quote this section without vs.11.

MKJV adds vs. 11: “10 Take heed that you do not despise one of these little ones. For I say to you that in Heaven their angels always behold the face of My Father in Heaven. 11 For the Son of Man has come to save that which was lost. 12 What do you think? If a man has a hundred sheep and one of them strays, does he not leave the ninety and nine and go into the mountains and seek the straying one?“(Manuscripts up to 8th century: =3; 9th – 12th centuries: =14) Except for the Diatessaron (±170) only one Church father up to the fourth century do quote this section with vs.11.

It is remarkable that vs.11 starts with “for” (gar) which indicates a connection with the previous matter while in this case vs.10 has nothing to do with “save which was lost“. When Jesus warns the bystanders not to despise the little ones, but reminds them of the fact that their angels come before the Father in Heaven. That is the important point, not that the little ones are lost! Adding this verse to the incident, actually distracts and diminishes the importance and impact of Jesus’ statement concerning the angels of the little ones. As the Word had been given initially it is the best. Any tampering with the original should be rejected.

But where does this important statement concerning Jesus’ seeking of the lost really fit in? It was most probably taken from the incident with Zacchaeus the tax collector, reported in Luke 19:10 and added to this place where it is not needed and does not really fit within the context. It is more directly in accordance with the report in Luke 19:10.

This statement concerning the seeking of the lost, had also been added to the report of the meeting between Jesus and Matthew, as is mentioned in Mat.9:13.

To be authentic, a report need not be identical with that of another witness. As a matter of fact, the uniqueness of each report rather proves its authenticity. Matthew and Luke did not copy one another, but each trusted his own research.